Through our quartet recordings Wanted, Captured and Escaped, and our musical derangements we’ve inspired new generations of bassoonists throughout the world to take up the belching bedpost. Our fourth CD features the Bassoon Brother’s performing Daugherty’s Hells Angels for bassoon quartet and orchestra on American Contrasts with the Oregon Symphony. 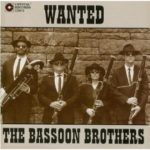 The Bassoon Brothers first CD released in 1997, Wanted! is for low-down playing and bass behavior! This album captured the imagination of critics and public alike. Called “Just plain hilarious… this disc pushed the frontiers of bassoondom” by Seattle Times (Melinda Bargreen), and “a sort of all-bassoon version of the Canadian Brass… I loved it” by Audiophile Auditions (John Sunier).

The album includes new works by Peter Schickele and an eclectic combination of classical, jazz, and popular tunes, including Hall of the Mountain King, Brubeck’s Blue Rondo a la Turk, and Bugler’s Holiday. 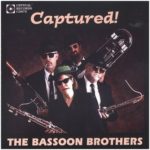 Captured! is the Bros. second CD, released in 2002. The irreverent antics are “captured” here in such works as the Godfather, Carmen, Sabre Dance, Hey Jude, Roll Out the Barrel, Yankee Doodle, and more. The bros are joined by guest artists Tommy Thompson on accordion for its additional reedy flavor on several tunes.

Check out the soulful and creepy sounds of the contrabassoon on the Sibelius Interlude and Hey Jude (What the heck is that drum solo near the end of Hey Jude?)

An easy five stars to “Captured!” by The Bassoon Brothers. In fact, five stars to any bassoon playing that has a pulse. The mix of tune choices and the arrangements are exquisite.

This is just a terrifically fun, inventive recording, featuring world-class performers playing truly innovative and interesting arrangements of a wide variety of music, from the cute and fun to the sublime and serious. 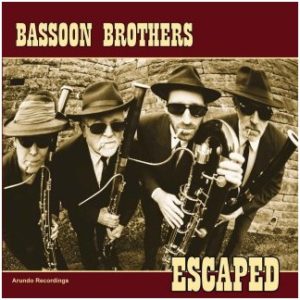 Escaped features a variety of music including fellow bassoonists PDQ Bach’s Lip My Reeds and Ode to a Toad by Ray Pizzi. There are solo leads on the sopranoon, tenoroon, bassoon and contrabassoon on tunes made famous by Gilbert & Sullivan. There’s big band bassoon and surfer rock electric wah wah bassoon on Misirlou and a beautiful rendition of Brian Wilson’s Surfer Girl. Walk the Line in tribute to Johnny Cash with some low down bassooning on Ring of Fire and Folsom Prison Blues and blue grass too with guest artist Gregory Ewer on violin on Orange Blossom Special. Of course we do some baroque and classical styling with music of Vivaldi, Bach and Grieg and a ‘oon consort with the whole family on a Renaissance tune.

This is some of the finest bassoon playing I’ve ever heard. They also cover about every genre of music one could want. This CD will make you laugh out loud.

“If you enjoyed the tom-foolery and the fun and games of the previous Bassoon Brothers CDs…then you will be thrilled with the latest and craziest edition…this has to be my favorite. The combination of crazy and the sublime is, to me, a perfect personification of the crazy and sublime world of the bassoonist.” 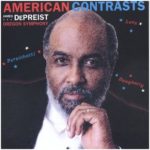 American Contrasts: The Bassoon Brothers can also be heard on the premiere recording of Michael Daugherty’s Hell’s Angels for Bassoon Quartet and Orchestra with the Oregon Symphony, James DePreist conducting. This may be the first recording of a piece for bassoon quartet and orchestra and hopefully not the last. 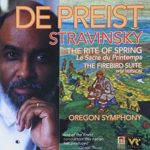 The Rite of Spring and The Firebird Suite 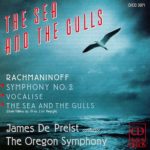 The Sea and the Gulls 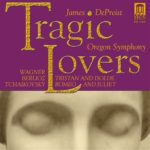 From live performances… Coming soon, so stay tuned! Some pieces will also appear on YouTube.