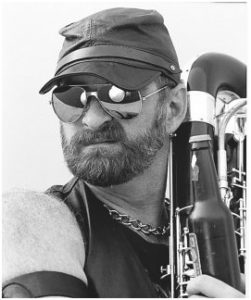 Juan de Gomar aka Low Thunder, Mr. Fabulous, hubba hubba, twice the bassoon that anyone could ever be, is responsible for the existence of the Bassoon Brothers. The second half of his 1985 Halloween bassoon recital featured bassoon quartets. Code name BDG, Juan was the first to leave the group and now performs with the Atlanta Symphony. He plays a 7500 series Heckel and a Fox contra with a pre war Heckel crook. In 2011, Juan will be one of the next lucky few to get a Fast System Contra.

Click on the questions below to read Juan’s answers.